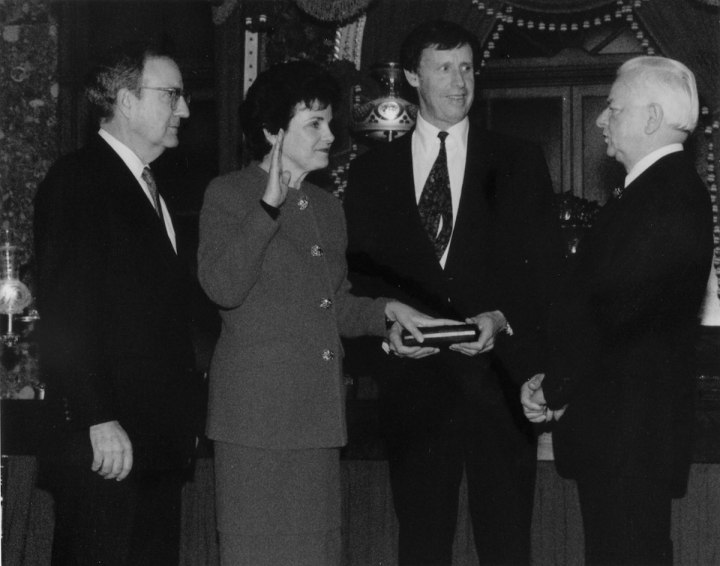 This week I was inspired by a Los Angeles World Affairs Council event featuring a conversation with Senator Diane Feinstein. I admire any woman who has had as many “firsts” as Senator Feinstein. In 1969 she was elected to the SF Board of Supervisors, eventually becoming the 1st woman ever to serve as the board’s president. In 1978 when Mayor George Moscone and Supervisor Harvey Milk were assassinated, Feinstein became acting mayor and San Francisco’s 1st female mayor. In 1992, she became the 1st woman elected to the U.S. senate from California. Feinstein was the 1st female member of the Senate Judiciary Committee and the 1st woman to chair the Senate Rules and Administration Committee. Thank you to Senator Feinstein and to all of the women trailblazers, who by being first, created a world of possibilities for all of us who followed.

Passionate about a profit with a purpose? TOMS is hiring a Director of CSR.

Expand access to the arts. The Irvine Foundation is hiring a Program Associate, Arts.

Have a need for speed? The Petersen Automotive Museum is hiring a Membership Manager.

Love to give advice? Otis College is hiring an Assistant Director of the Center for Creative Professions.

Do you have a commitment to excellence and service? The City of Oxnard is hiring a Public Relations & Community Affairs Manager.

Studio Channel Islands Art Center is actively seeking an Executive Director who passionately believes that the creative process is essential for not only personal growth, but community enrichment as well.

Empower a generation to change the world. Net Impact is hiring Director of Chapters & Events in SF.

Advance the arts in paradise. The Arts Council of Monterey is hiring an Arts Education Dir. in Carmel.

Protect clean water in California. The Clean Water Action and Clean Water Fund is hiring a Communications Manager in Oakland.

Inform and improve public policy in CA. The Public Policy Institute of California is hiring Director of Government Affairs in Sacramento.

Empower young women. The YWCA Silicon Valley is hiring a Director of Education & Empowerment in SJ.

Improve the lives of all Californians. The Blue Shield of California Foundation is hiring a Program Officer in SF.

A MacArthur Foundation Award recipient, the Conservation Strategy Fund is hiring an Executive Director in SF.

Committed to building peace and advancing human freedom? Humanity United is hiring a Director of Investments in SF.

Live for volunteerism? UNICEF is hiring a Deputy Director, Community Mobilization in NYC.

Work to narrow the disparity in the delivery of health care services and information to underserved communities. Henry Schein is hiring Director a Director Global Social Responsibility in Melville, NY.

Do you want a cookie with your order? Panera Bread is hiring a Corporate Social Responsibility Manager in Boston.

The Center for Arts Education, a leading advocate for and provider of arts education in New York City public schools, seeks a passionate and mission-driven Executive Director.

The Alliance for Nonprofit Management, the premier national voice and catalyst for capacity-building of the nonprofit sector, is seeking an experienced, self-starter Executive Director.

Support and grow nonprofit organizations. Arabella Advisors is hiring Program Associates in SF, Chicago and NYC.
Improve lives around the world. The Milken Institute is hiring an Associate Director, Strategic Philanthropy in DC.
Cultivate the power of plants. The Chicago Botanic Garden is hiring a President & CEO.